Femitone is a femineity beautifying drug which acts on feminine related conditions like, 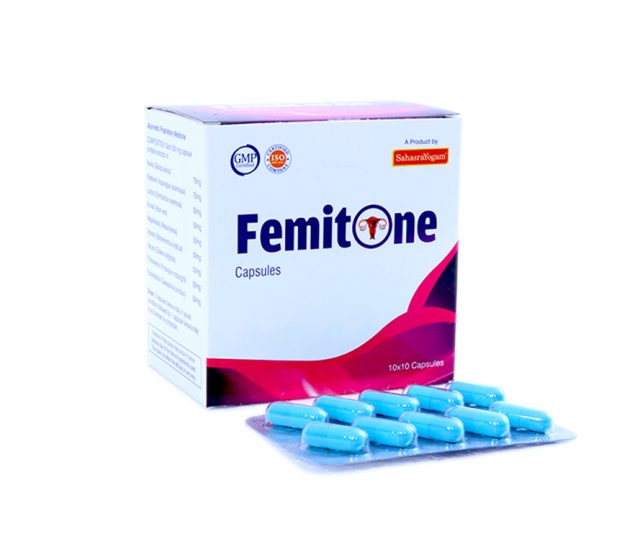 Is a disorder affecting the women of reproductive age group caused due to hormonal imbalance of either oestrogen, GNRH, FSH. Any imbalance in these hormones will lead to PCOS. In a breakdown of these reproductive hormones, the ovaries release the abnormal quantity of male hormones(androgens) which will result in prolonged menstrual period, irregular menstruation, loss of hair, acne and excessive body hair, especially on the chin and hyperpigmentation in the neck. In this condition, ovaries will fail to produce follicles and regular release of the eggs, this absence of the egg will lead to difficulty in conception.

Menorrhagia is substantial heavy menstrual flow, usually lasting for more than seven days, prolonged bleeding and with severe cramps which disturb the day- to- day activity due to fatigue and tiredness because of leaden blood loss. Causes being the development of the endometrium in excess, fibroid uterus and others.

Metrorrhagia is irregular bleeding actually between two menstrual cycles, associated with stress and due to the approaching menopause.

Fibroid uterus is a condition which occurs in women of the child bearing age, this is a noncancerous growth of the uterus. Symptoms are usually back pain and increased menstrual bleed, increased number of urine urges, pain during coitus.

Anovulatory cycle is a condition in which the absence of the egg from the ovary in the normal menstrual cycle. This condition will be associated with irregular bleeding.

Femitone In Regularizing the cycles:

Influence of Femitone on Hormones:

Caution: Above content is for information only, not for self-treatment or diagnosis. Medications to be strictly taken under ayurvedic physician’s prescription only.

Dosage: 2 capsules twice a day in acute condition, followed by 1 capsule twice or thrice daily with warm water after food for 60-90 days or as directed by Vaidya.